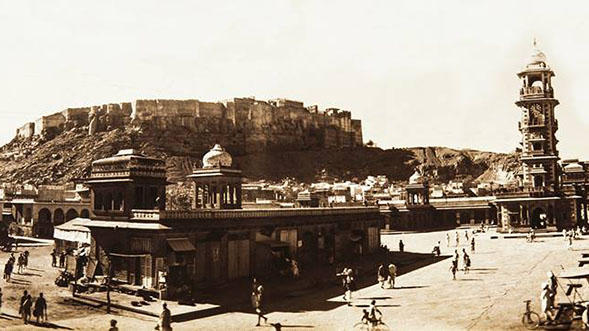 Sardar Market lies slap bang in the city centre. It has a beacon to signal its location, the imposing Clock Tower that was built by Maharaja Sardar Singh (1880-1911) from whom the market takes its name. In fact, the tower dominates the entire scenario. The sights and sounds of the market must be experienced, even if you don’t intend to buy anything as it is a stupendous cornucopia of a mix of the human species, a spectacle where you can casually look around and see what generally transpires in a busy and noisy Indian market in a city on the run. Locals hawk virtually everything like bangles, imitation jewellery, fruit & veg, spices, pottery, baskets, clothes, etc. It’s a 70 mm cinemascope with unknown and faceless humans in the lead roles for many tourists, most of whom are filming it live. It could well end up on YouTube!
Sardar Market, Girdikot Narrow alleys suddenly dart into exotic bazaars selling anything from textiles, antiques, silverware to handicrafts. Each bye-lane has its own specialty. Bangles are very popular. The main entrance to Sardar Market is from the opposite side, coming up Nai Sadak, through a gate which named Girdikot (crowded gate). Nai Sadak has always been lined with sari and shoe shops. The range of items seen in this bazaar varies from its specialty, tie & dye textiles and hand-embroidered leather shoes, to lacquer ware, genuine and ‘just-made’ antiques, carpets and rugs, quilts and blankets in winter, puppets dressed in typical Rajasthani styles to exquisite Rajasthani textiles, filigreed miniature beasts of burden, marble inlay work, and old-age silver jewellery. It is a vivid example of 19th-century town planning gone awry. The planners didn’t expect India to cross all limits in birth rate and population!
Obviously, the result is either amusing or annoying chaos, with tiny shops full of loud bargaining customers lining both sides of the narrow lanes. To say that the market displays a magnificent blend of modern architectural concepts with Rajput traditions would be tinkering with facts. But then, it’s a war down there and everything is fair in such a setting. A wide range of handicrafts will always be found in shops in markets like these. A variety of spices, vegetables, and colourful Indian sweets are invariably available in shops that are very crowded. Rajasthani sweets are overly sweet, generally drenched in a sugary fluid and best avoided. Second-hand defence castaways, old books, old bags and other similar detritus will be spotted somewhere.

This is one of oldest markets of Jodhpur. It is noisy, dirty yet colourful and may well have close to 7,000 match-box sized shops. Be prepared to muscle your way through the narrow lanes, with others brushing past you as this market is a shopper’s delight. The exquisite bangles and beautiful scarves, lovely handmade bags and Jootis (slip on shoes with a pointed front) are a visual delight. Bargaining is expected, but don’t try to hammer down prices as a lot of manual work goes into the making of these intricate items and objects. Remember that the tourist season in Jodhpur is just four months, and shopkeepers do depend on tourists for their living. If you look up, you will see a frightening number of electricity and phone lines in a tangled skein. This is a common sight in ALL Indian markets and nothing to worry about. Forget about them.

The cloth market, just off the fruit and vegetable market, is a maze of passageways lined with small open shops stacked from floor to ceiling with brightly coloured cloth. The colours are really bright− reds, pinks and greens that really stand out. There is a reason for these colours, as they can be easily spotted in the desert. Sardar Bazaar is a typical Rajasthani or Gujarati market, with a bursting riot of sights, sounds and smells. Popular souvenirs include Bandhej sarees and fabric, Mojris or Jootis, among many others.