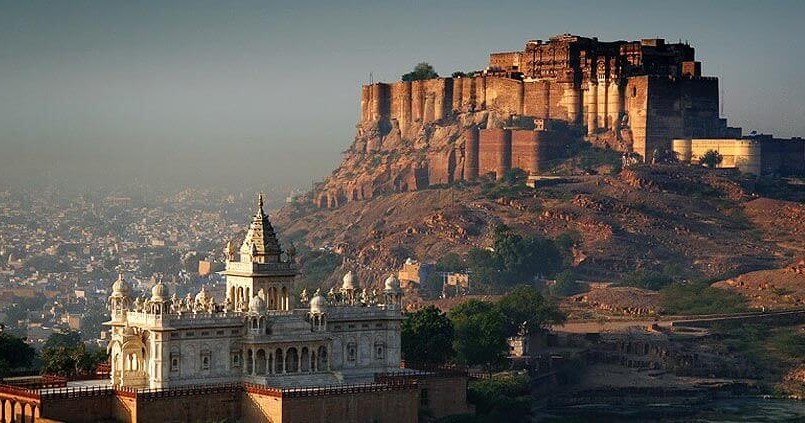 Mehrangarh Fort is one of the largest forts in forts. It is also the most magnificent fort in Jodhpur, in fact, in the whole Rajasthan. The fort is amongst the popular tourist places in India. It is situated on a 150 m high hill. It was founded by Rao Jodha in 1459. The Mehrangarh Fort can be reached from the city, 5 km below, through a circular road.
Seven gates have to be crossed to reach the fort. The gates still bear the marks of the various battles fought in the bygone era. Its second gate still stands witness to canon ball hits by attacking armies of Jaipur during wars. One of the gates is Jayapol, meaning victory. It was built by Maharaja Man Singh to commemorate his victories over Jaipur and Bikaner armies. Another gate, Fattehpol, again meaning victory, was built by Maharaja Ajit Singh as a celebration for defeating the Mughals.

Other attractions of Mehrangarh Fort, Rajasthan include several palaces inside the fort, with their sprawling and huge courtyards. One of the fort’s palaces, The Moti Mahal or the Pearl Palace, has the royal throne of Jodhpur, the Sringar Chowki. The fort also has galleries, temples, etc. To the left of the Mehrangarh Fort is the Chhatri of a soldier, Kirat Singh Soda. It is the spot where he fell while defending the fort against the armies of Amber.

The Mehrangarh Fort, with its beauty, is the living proof of the hard work and skill of the Jodhpuri sculptors.